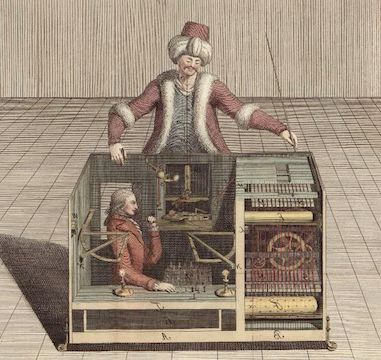 Guest Worker is an art installation, made in 2019 by Merijn van Moll and Ruben van de Ven, resulting from a collaboration between the NSvP and SETUP. The installation addresses the question: “What is the impact of Artificial Intelligence on the labour market what does it mean for diversity and inclusion?” Guest Worker zooms in on gig work and the platform economy and, such as Amazon’s Mechanical Turk, and makes tangible what is at stake. During the Brave New World Conference you can see Merijn van Moll and Ruben van de Ven at work as Mechanical Turks on a separate livestream parallel to the conference.

When it comes to new technology, we talk about smart systems, with artificial intelligence, which can make their own decisions. Our devices do our work, seemingly without human interference. But that is not the whole story. There are all kinds of tasks that AI is not (yet) able to carry out independently; think of retyping scanned receipts or deleting fake news from Facebook. People are needed to properly transfer or check information, for example from analogue to digital, from audio to text or from implicit to explicit. There is an enormous amount of human work lurking in seemingly automated systems. In this way, AI ensures the growth of a huge hidden working class. A whole army of independent and isolated online workers, who together are the driving force behind our smart systems. However, they are invisible, often poorly paid, and above all, undervalued.

What does diversity and inclusion in gig work mean?
The online platform Amazon’s MechanicalTurk (MTurk) employs millions of digital workers worldwide who carry out assignments – human intelligence tasks (HITs) – from home. These tasks are mainly fragmentary micro-tasks with repetitive actions, which ironically, for people are often far from complex or challenging. The promise is that these systems will make the labour market more inclusive. This is partly justified; marginalised groups can register as MTurkers, provided they have a laptop and internet connection. With workers all over the world, there is a certain degree of inclusiveness. But due to the lack of transparency inclusiveness is at stake – workers are completely dependent on the system that sometimes makes inexplicable decisions; sometimes workers are ignored without knowing why, do not receive promised bonusses or get blocked without fair explanation. Moreover, the system is often set up in such a way that the workers have no contact with each other; they work completely shielded and isolated.

Human workers as ‘temporary’ help
The suggestion is made that this is a temporary situation: we still need people to train our algorithms now, but when AI can function are fully autonomous this work will no longer be necessary. This is called the last mile; these are the last meters in which people have to carry the AI to the finish line. This fits in with the prevailing story that our systems will eventually be fully autonomous. But the question is to what extent the finish line will keep moving with new developments, so that human activity continues to be necessary for nearly fully automated work. By seeing human workers as ‘temporary help’, we ignore the size and significance of that entire working class. Moreover, the ‘human’ is reduced to what computers need from us.

The ‘real’ last mile
Diversity in gig work therefore has little meaning. A balanced staff composition in gig work does not create an inclusive culture. For human workers, there is a lack of opportunities to express their human added value, making inclusiveness and diversity empty concepts. To get there, we have to get rid of the idea that technology is – and must be – completely autonomous. The real ‘last mile’ is that we are going to see human workers as more than the temporary helpers of AI.

Art installation
The installation Guest Worker makes these invisible online workers visible in real time for the first time. It also makes it clear that this is not a balanced cooperation between man and machine. Commissioned by NSvP and SETUP, designers Merijn van Moll and Ruben van de Ven dived into the world of ‘ghost workers’. They created a new HIT in MTurk, with the assignment “Trace the drawn line“. The assignment starts with a square, which the first worker has to cover digitally with the mouse. That work is then input for the next MTurker. The taut lines soon disappear and make way for organic shapes. Because the workers trace each other’s work, there is an implicit interaction between the various workers worldwide. And as a spectator, you watch the work being performed live. In this way, the ghost workers are suddenly visible and ‘physically present’- they are evoked as ‘guest workers’ in the space.

This article is a summary of the article “How AI made an entire working class invisible”, written by Frank-Jan van Lunteren. You can read the original and complete article in Dutch here.